When the infamous question “what kind of doctor do you want to be?” has been thrown my way, I have typically responded by throwing out three fields of medicine that I currently find interesting: pediatrics, endocrinology, and geriatrics. However, while the usual response includes much satisfaction about 2 of my potential career choices—with lots of oohs and ahhs about the joys of treating children, and the approving nod for endocrinology because, hey, diabetes—the standard, usually skeptical, follow up question I receive is: why would you want to take care of old people if they are just going to die soon anyway? Isn’t that…depressing?

Despite these ageist misconceptions, the importance of the growing need for trained geriatricians in the U.S. cannot be denied. According to the Association of American Medical Colleges, the latest studies are suggesting that by 2025 the number of American baby boomers over the age of 65 will double, and become the fastest-growing age group in the country. This demographic will soon account for 20% of the nation’s population! We can see the practical results of this trend today, as Americans are clearly living longer, requiring assistance in managing chronic health conditions like hypertension, heart disease, diabetes, dementia, etc.

The most alarming fact? The American Geriatrics Society has estimated that 25,000 certified geriatricians are needed in order to provide quality care to this growing population, but currently there are fewer than 7,500 geriatricians in the U.S. In fact, only 44% of the nation’s 353 geriatric fellowship positions are even filled. Geriatrics is considered to be one of the most underrepresented specialties, even though geriatricians have been found to have high career satisfaction.

So, why the disinterest from budding physicians? Financially, geriatrics is often not considered attractive, particularly with nascent residents facing a looming amount of debt right after medical school. Most elderly patients have either Medicare or Medicaid, which have traditionally lower rates of reimbursement for physicians than that of private health insurance. Indeed, geriatricians, despite the extra years of training, have traditionally received less compensation than other subspecialists.

What can be done to help entice young physicians to this challenging field of medicine? While a restructuring of the current reimbursement difficulties would be an ideal fix to this situation, and would help entice young physicians to geriatrics, perhaps more immediately realizable goals should be considered in the meantime. For example, emphasizing the importance of geriatric medicine within medical school curricula is one alternative and realistic way in which to effect change. Students could learn of the intricacies and complexities involved in providing care to this population. This would be particularly relevant for students, as they are the generation of doctors which will be faced with treating a larger population of older individuals, given the statistics mentioned above.

Here is an even simpler idea: help people realize their passion for the field. Dr. Mitchell Heflin, MD, an associate professor of medicine at Duke University School of Medicine, said it best, “People in geriatrics are called to it.” A commonly cited influence for this career choice is meaningful interactions, particularly in childhood, with older populations. I personally can see why I am drawn to this field of medicine, as much of my happiness as a child (and up to the present day), has revolved around my experiences with the elderly. I remember every Sunday I would cross the street and have a spaghetti dinner with our elderly neighbor, affectionately known as Auntie Eva. She was a chain smoking, fiercely opinionated and loving German lady from Buffalo, who could make a killer homemade marinara sauce and meatballs. Even more influential, however, is the relationship I have with my now 83 year old maternal grandmother who has lived with my family since my birth. She not only always babysat me, but also taught me how to fish, ride a bike, tie my shoes, and crochet. Watching her gracefully age with a high quality of life through her 60s and 70s, and then seeing her current struggle with the beginning stages of dementia, has really made me reflect upon the importance of geriatric care in our society and my potential role in it.

So, while I’m not yet sure if geriatrics is in the cards for me, it is obviously a complex field of medicine, critical for the health of the older population and for the health and dignity of our society at large.

Featured image supplied by the author

Samira Hassan
​Samira is a member of the University of Central Florida College of Medicine class of 2019. She graduated from Johns Hopkins University with a B.A. in Behavioral Biology and Spanish, and an M.S. in Health Science degree in Biochemistry & Molecular Biology (Concentration: Reproductive & Cancer Biology) from the Bloomberg School of Public Health at Johns Hopkins. In her free time, Samira enjoys cooking, writing and journaling, and spending time with her family and friends.
Post Views: 2,853 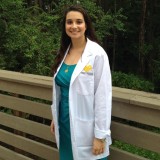 ​Samira is a member of the University of Central Florida College of Medicine class of 2019. She graduated from Johns Hopkins University with a B.A. in Behavioral Biology and Spanish, and an M.S. in Health Science degree in Biochemistry & Molecular Biology (Concentration: Reproductive & Cancer Biology) from the Bloomberg School of Public Health at Johns Hopkins. In her free time, Samira enjoys cooking, writing and journaling, and spending time with her family and friends.